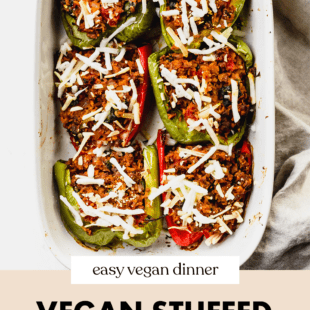 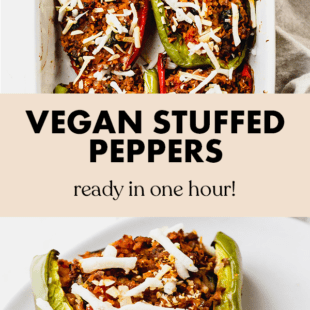 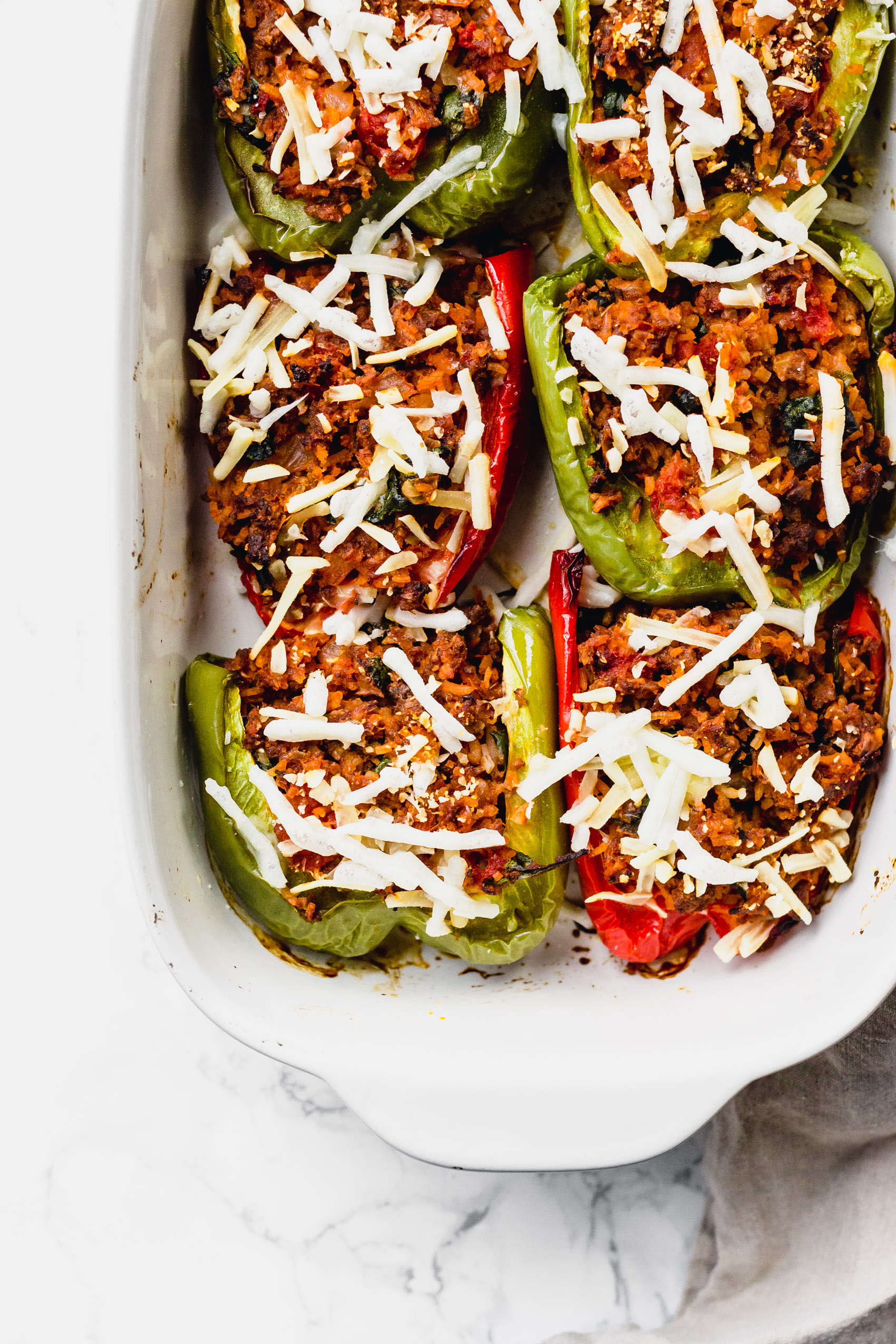 Did anyone else just get a total blast from the past looking at this tray of vegan stuffed bell peppers? Because I did making them!

This is one of those classic recipes that can be spun a million different ways, but this is my take on a classic stuffed bell pepper – and they’re entirely plant-based! These vegan stuffed peppers are filled with rice, ground beef, tomato-ey goodness and plenty of cheese just like the ones you ate growing up.

If you find yourself wondering how to eat more vegetables, stuffed bell peppers are a great way to get an extra serving! A halved bell pepper is the perfect vessel to hold delicious all of the delicious fillings. And when you roast peppers in the oven, they blister a bit on the outsides, soften up a bit on the inside and get super juicy. Plus, bell peppers naturally come in a variety of colors based on their ripeness, so it’s a great way to eat the rainbow with just one vegetable!

But before we get into it I have to know – do you make your stuffed peppers by cutting the tops off of your bell peppers, or by halving them down the middle? 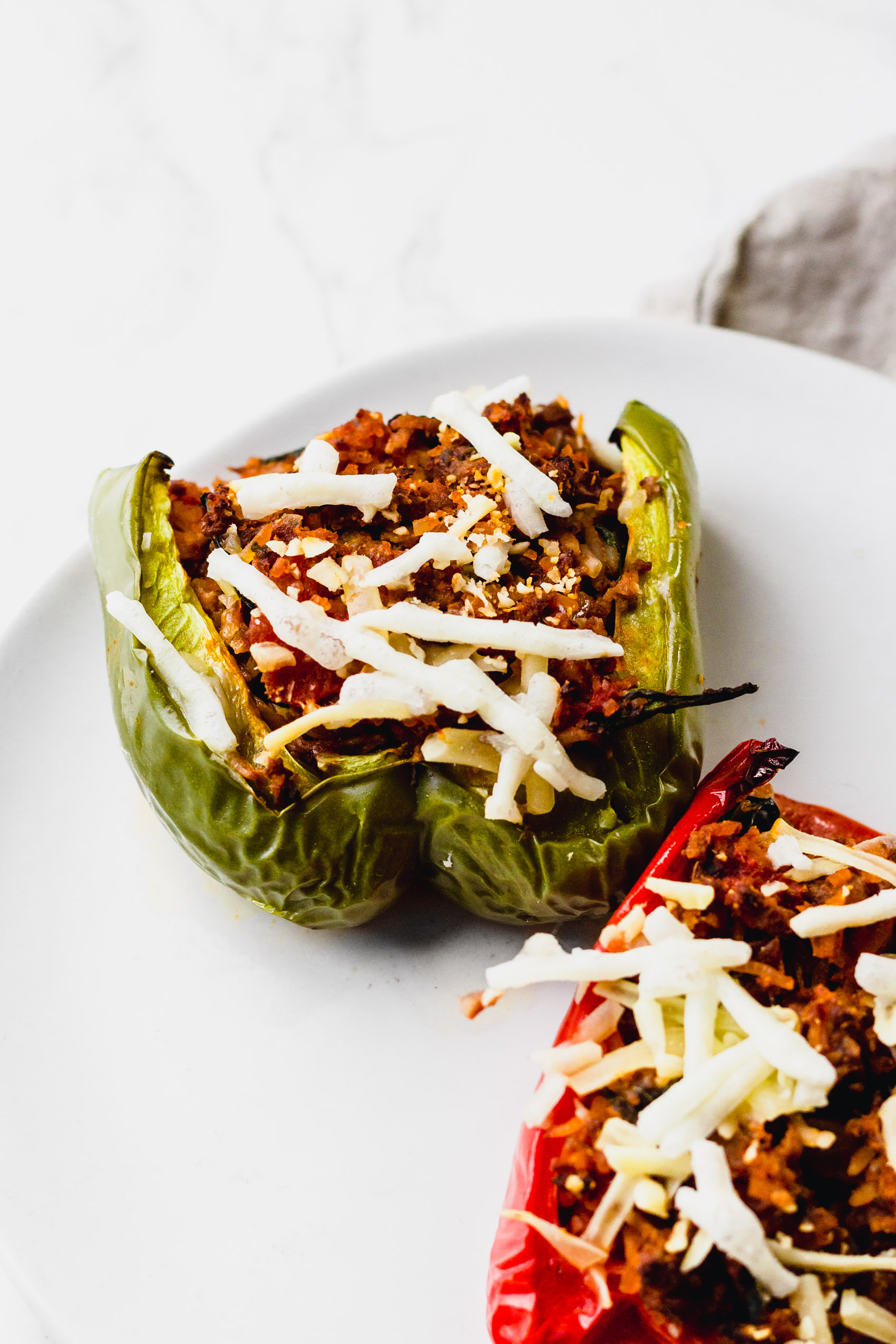 These vegan stuffed peppers are part of my Basics series, where I’ve been making super basic, vegan versions of classic recipes – no crazy ingredients, no fancy twists. So in the spirit of keeping things simple, the ingredient list is pretty simple. Here’s everything you’ll need to make these easy stuffed peppers: 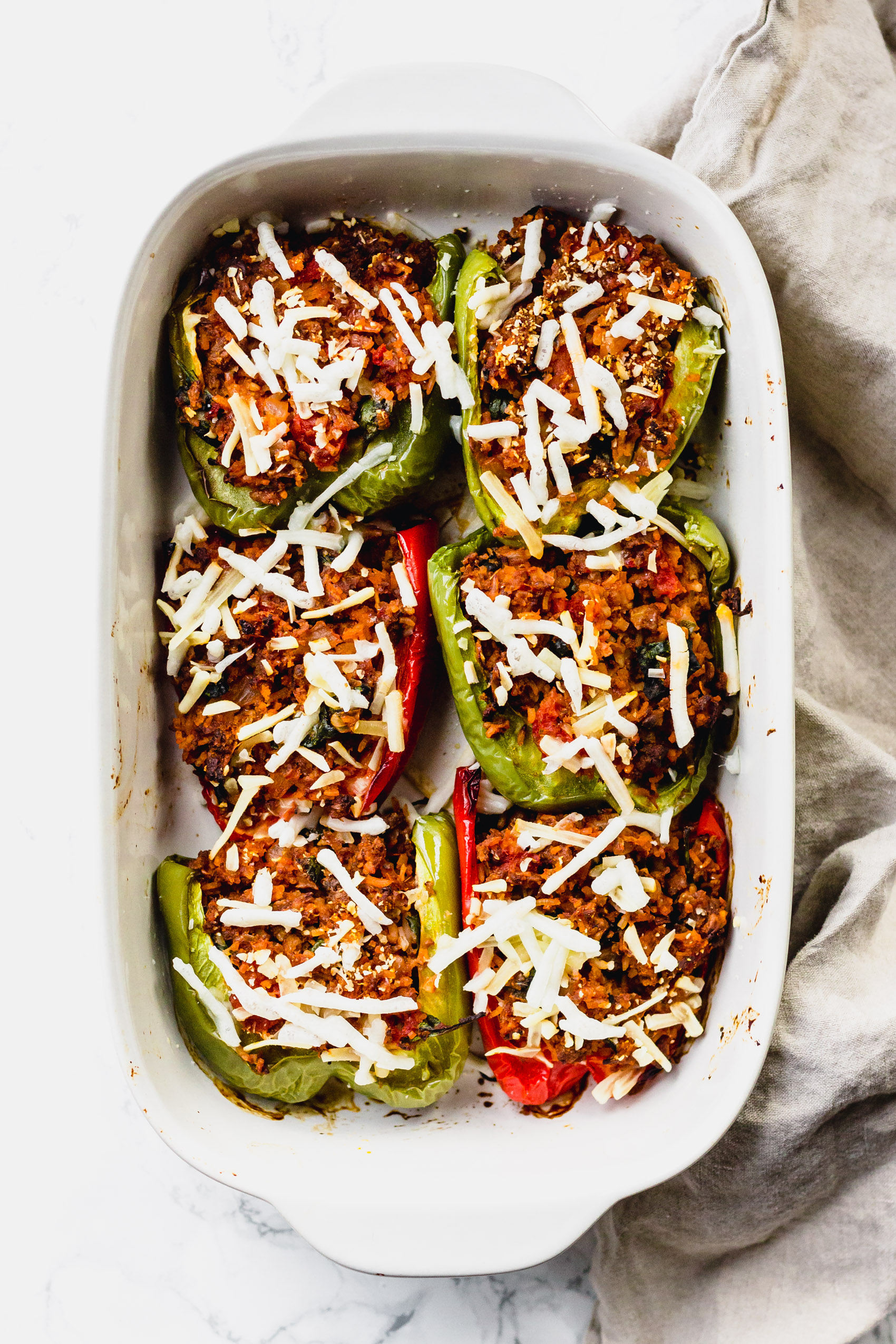 How to Make Stuffed Peppers

These vegan stuffed peppers will take a little over an hour to make, but most of the cook time is hands-off! Once they’re in the oven, there’s not much left to do but watch your stuffed bell peppers bake and wait in anticipation. All you have to do to make this vegan stuffed peppers recipe is:

That’s all there is to it! Not only is it super simple to make, but I assure you it might just be the best stuffed peppers recipe I’ve ever made. 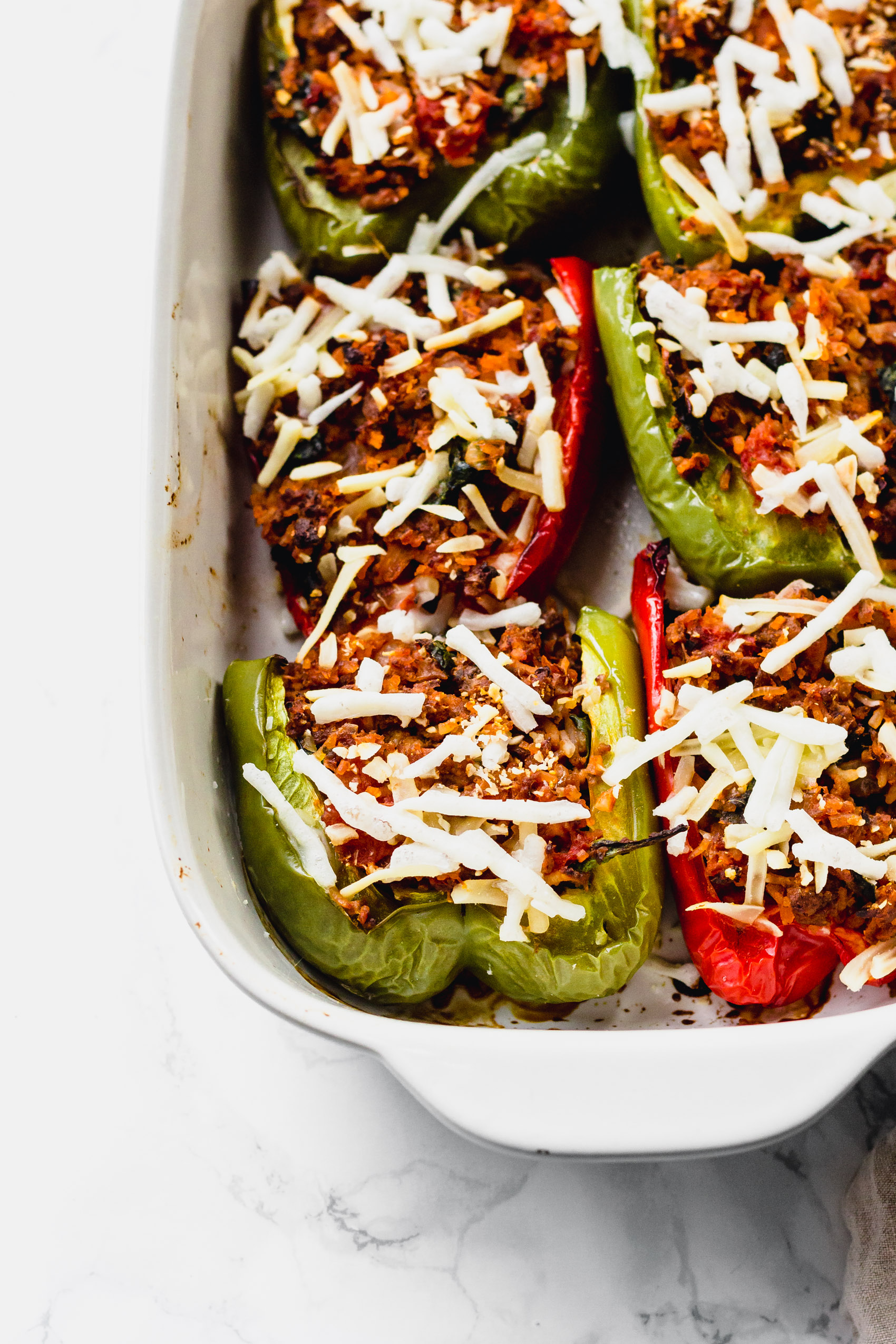 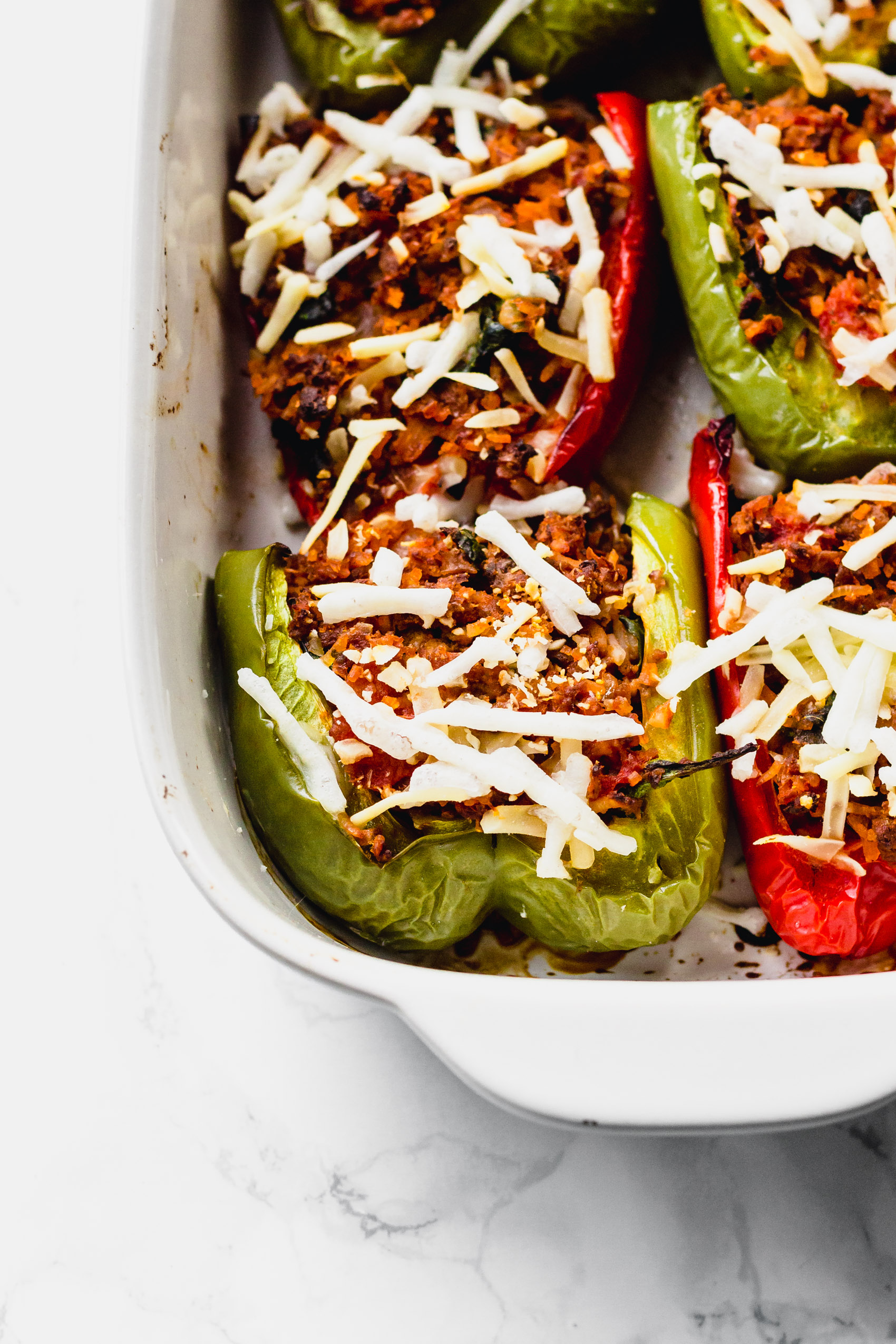 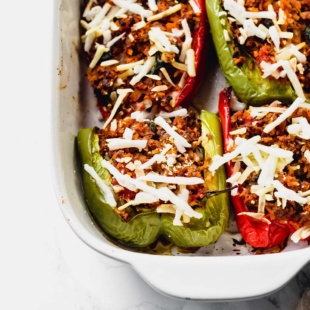 *Examples of this are Beyond Beef Plant-Based Ground and Impossible Plant-Based Burger Ground. You could also use vegan ground crumbles. Textured vegetable protein (TVP) or 1 block tofu would work, but you will have to compensate for missing flavor and sodium with more spices and salt. 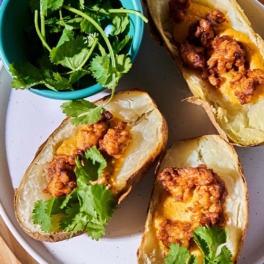 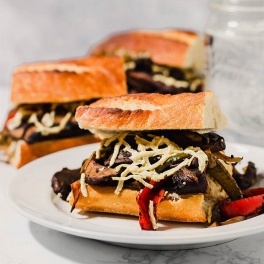 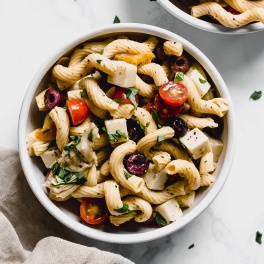 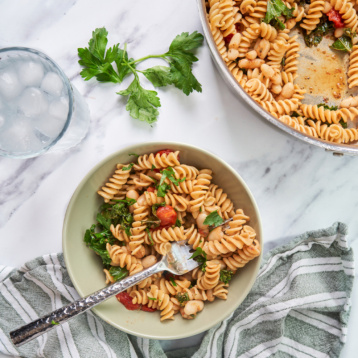 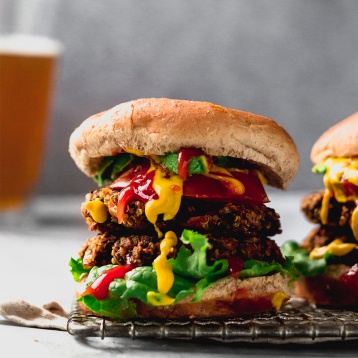 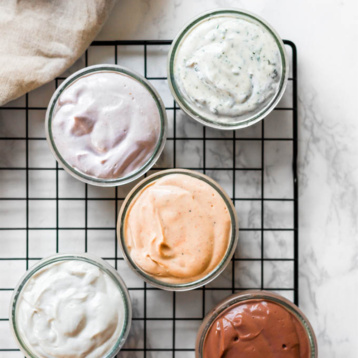